Aloin, also known as Barbaloin [Reynolds, Aloes - The genus Aloe, 2004], is a bitter, yellow-brown colored compound noted in the exudate of at least 68 Aloe species at levels from 0.1 to 6.6% of leaf dry weight (making between 3% and 35% of the toal exudate) (Groom & Reynolds, 1987), and in another 17 species at indeterminate levels [Reynolds, 1995b]. It is used as a stimulant-laxative, treating constipation by inducing bowel movements. The compound is present in what is commonly referred to as the aloe latex that exudes from cells adjacent to the vascular bundles, found under the rind of the leaf and in between it and the gel. When dried, it has been used as a bittering agent in commerce (alcoholic beverages) [21 CFR 172.510. Scientific names given include Aloe perryi, A. barbadensis (= A. vera), A. ferox, and hybrids of A. ferox with A. africana and A. spicata.]. Aloe is listed in federal regulations as a natural substance that may be “safely used in food” when used “in the minimum quantity required to produce their intended physical or technical effect and in accordance with all the principles of good manufacturing practice.” This food application is generally limited to use in quite small quantities as a flavoring in alcoholic beverages and may usually be identified only as a “natural flavor.”

In May 2002, the U.S. Food and Drug Administration (FDA) issued a ruling that aloe laxatives are no longer generally recognized as safe (GRAS) and effective, meaning that aloin-containing products are no longer available in over-the-counter drug products in the United States, because they may be carcinogenic and more data is needed to establish otherwise. Aloe vera leaf latex is a concentrate of an herb or other botanical, and so meets the statutory description of an ingredient that may be used in dietary supplements.

Aloin extracted from natural sources is a mixture of two diastereomers, termed aloin A (also called barbaloin) and aloin B (or isobarbaloin), which have similar chemical properties. Aloin is an anthraquinone glycoside, meaning that its anthraquinone skeleton has been modified by the addition of a sugar molecule. Anthraquinones are a common family of naturally occurring yellow, orange, and red pigments of which many have cathartic properties, attributes shared by aloin. Aloin is related to aloe emodin, which lacks a sugar group but shares aloins biological properties.

Aloin is usually prepared by extraction from aloe latex (the term "Cape aloe" also refers to the dried latex of the leaves of several species of the Aloe genus, especially A. ferox [Blumenthal, 1998]), the bitter yellow exudate that seeps out from just underneath the skin of aloe leaves. The latex is then dried and powdered to make the final product, often made into tablets or a beverage, though aloin does not have good stability in aqueous solutions. Products derived from the gel of the aloe plant do not contain appreciable amounts of aloin, and have not been proven effective for any disease or condition when taken orally. 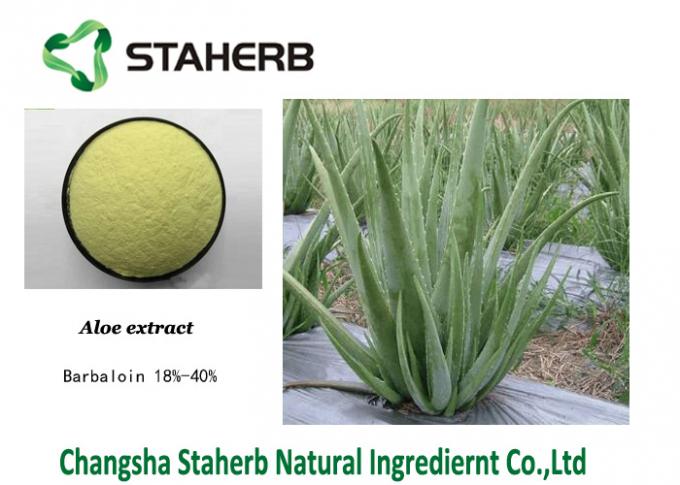