Oleuropein is a chemical compound found in olive leaf from the olive tree (and leaves of privet) together with other closely related compounds such as 10-hydroxyoleuropein, ligstroside, and 10-hydroxyligstroside. All these compounds are tyrosol esters of elenolic acid that are further hydroxylated and glycosylated. Oleuropein and its metabolite hydroxytyrosol have powerful antioxidant activity both in vivo and in vitro and give extra-virgin olive oil its bitter, pungent taste. Oleuropein preparations have been claimed to strengthen the immune system. 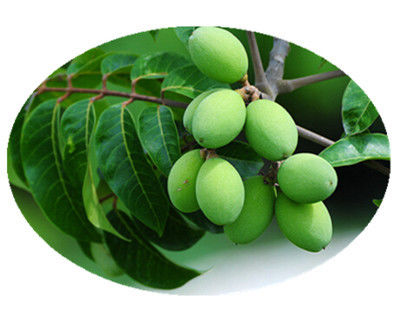 1. Inhibiting the growth of every virus, bacteria, fungi and protozoa and killing them.

2. Preventing the onset of colds, flu, and a range of viruses, yeast, fungal and mould problems, bacterial infections, and parasites. Even being found as an effective treatment and preventive for malaria.

4. Being lethal to some cancer cells based upon it's general immune enhancing properties.

5. Being a useful treatment for the opportunistic infections associated with HIV.

1. Olive leaf extract can be made into capsules, troche and granule as healthy food and drug.

2. High quality Olive leaf extract, which have good solubility in water and ethanol plus the solution transparence and brilliance color, has been widely added into the beverage and cosmetics as the functional content.

3. Olive leaf extract can be incorporated into a formulation for skin damage either by UV radiation or for assisting with wound healing.

4. For its anti-oxidant, Olive leaf extractis also added into all kinds of foods as the nurture, natural antiseptic in Europe and USA, and it has increased the safety of the food.