square crystal, melting point 2000C, soluble in the water, ethanol, hardly soluble in the aether.
Amygdalin (Vitamin B17) (from the Greek word for ‘almond’) is a substance found in the seeds of many kinds of fruits, such as plums, cherries, oranges, nectarines, apples and peaches, as well as in raw nuts, including bitter almonds. Apricots contain a particularly large amount of Vitamin B17 (amygdalin), and it’s also abundant in plants such as clover, lima beans, millet, mung bean sprouts and sorghum. These are all highly nutritious foods with chemical contents that provide an excellent range of important benefits for the human body. As a result, many people have begun to call amygdalin ‘vitamin B17’.
Vitamin B17 was first discovered and isolated by two French chemists in the early 1800s, because they saw potential for the substance’s role as a source of healing when combined with other nutrients. Since then,Vitamin B17 (amygdalin) compounds have been given several other scientific names, one of which is ‘laetrile’, an acronym of laevorotatory and mandelonitrile. You’ll see this name used when it’s describing a purified form of amygdalin AKA Vitamin B17.

Toxicity The metabolism of amygdalin produces hydrogen cyanide, a potent toxin. Beta-glucosidase, one of the enzymes that catalyzes the release of cyanide from amygdalin, is present in the human small intestine and in a variety of common foods. This leads to an unpredictable and potentially lethal toxicity when amygdalin or laetrile is taken orally. Ingestion of purified amygdalin or apricot seeds can cause severe toxicity and death due to cyanide poisoning. Numerous case reports in medical literature describe serious cyanide poisoning in patients who ingested laetrile as a cancer treatment.

Cancer treatment One hundred seventy-eight patients with cancer were treated with amygdalin plus a "metabolic therapy" program consisting of diet, enzymes, and vitamins. The great majority of these patients were in good general condition before treatment. None was totally disabled or in preterminal condition. One third had not received any previous chemotherapy. The pharmaceutical preparations of amygdalin, the dosage, and the schedule were representative of past and present Laetrile practice. No substantive benefit was observed in terms of cure, improvement or stabilization of cancer, improvement of symptoms related to cancer, or extension of life span. The hazards of amygdalin therapy were evidenced in several patients by symptoms of cyanide toxicity or by blood cyanide levels approaching the lethal range. Patients exposed to this agent should be instructed about the danger of cyanide poisoning, and their blood cyanide levels should be carefully monitored. Amygdalin is a toxic drug that is not effective as a cancer treatment.

How is Amygdalin administered?

The side effects of Amygdalin treatment are like the symptoms of cyanide poisoning. These symptoms include:

3.Blue color of the skin due to a lack of oxygen in the blood;

7.Trouble walking due to damaged nerves; 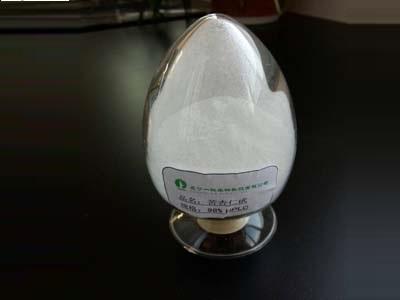