[Notice] This product is dietary nutritional supplements, can not replace the drug.

Raspberry is cultivated in Europe and has many cultivars for fruit use. Raspberry fruit contains a lot of nutrients of vitamin A, vitamin C, calcium, potassium, magnesium and a large number of fibers. In 100 grams of raspberry contains, 87% of water, 0.9 grams of protein, 4.7 grams of fiber, can provide 209.3 kJ of calories. Raspberry can effectively relieve cardiovascular disease such as angina, but sometimes cause minor diarrhea. Raspberry fruit is sweet and sour, of "golden fruit" reputation. Raspberry is rich in salicylic acid, phenolic acid and other substances. Salicylic acid is known as "natural aspirin", widely used in analgesic antipyretic, anti-coagulation, can effectively prevent thrombosis. Long-term eating of raspberry, can effectively protect the heart, prevent high blood pressure, vascular wall atherosclerosis, cardiovascular and cerebrovascular embryo rupture and other cardiovascular and cerebrovascular diseases.

1. Sources and Habitation
Raspberry ketone is a natural phenolic compound that is the primary aroma compound of red raspberries. Raspberry ketone occurs in a variety of fruits including raspberries, cranberries and blackberries. It is biosynthesized from coumaroyl-CoA.
2. Descriptions and Specifications of Product
Plant original: Rubus idaeus
Specifications: 98.0% Raspberry Ketone Test by HPLC
Molecular Formula: C10H12O2
Molecular Mass: 164.20
CAS NO: 5471-51-2
Constitutional Formula: 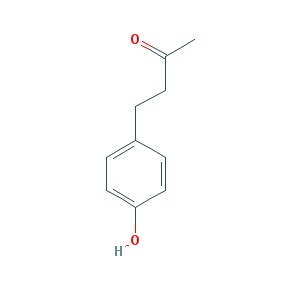 3. Indications and Uses
Raspberry ketone is used in perfumery, in cosmetics, and as a food additive to impart a fruity odor.It is one of the most expensive natural flavor components used in the food industry.
Raspberry ketone is a chemical from red raspberries that is thought to help for weight loss. Some research in animals or in test tubes shows that it might increase some measures of metabolism.It might also affect a hormone in the body called adiponectin.
4. Safety Concerns
There isnt enough information available to know if raspberry ketone is safe to take as a supplement. Raspberry ketone has never been scientifically studied in humans to determine if it causes side effects. However, there are some concerns about the safety of raspberry ketone because it is chemically related to a stimulant called synephrine. Therefore, it is possible that raspberry ketone might cause feelings of jitteriness, increase blood pressure, or rapid heart beat. In one report,someone who took raspberry ketone described feelings of being shaky and a pounding heart beat (palpitations).
Tag: