Astaxanthin, a member of the carotenoid family, is an oxygenated red-orange pigment. Professor Basil Weedon was the first to map the structure of astaxanthin. Astaxanthin is found in microalgae, yeast, salmon, trout, shrimp, crustaceans, and other sources. However, Haematococcus pluvialis appears to be the best source of astaxanthin. Astaxanthin cannot be synthesized by human and it must be provided in the diet. Astaxanthin has been proven to be one of the most powerful anti-oxidants yet discovered. University study shows Astaxanthin to be up to 550 effective than Vitamin E and 4 times than lutein in various antioxidant capacities.It freely crosses the blood-brain and blood-retina barriers to provide powerful support for eye and nervous system health. Moreover, increasing evidence suggests that Astaxanthin has extremely useful characteristics in scavenging of active oxygen, immune stimulation, cancer prevention and so on. Preclinical studies demonstrate that astaxanthin is safe and no known side effects.

the skin for protection against sunburn.

1. Used in food and health care products as additive.

2. It is also can be used as animal feed additive to impart coloration, including farm-raised salmon and egg yolks.

3. Due to the functions of prevent cancer, resist cancer,and anti-oxidant, astaxanthin is widely used in pharmaceutical field.

4. Used in cosmetics because of its property of Antioxidant and UV protection. 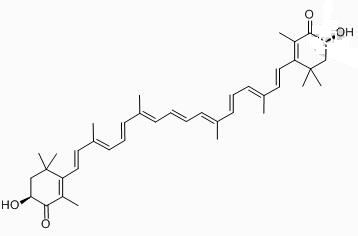